From Flanders to Rome: Josquin and his legacy 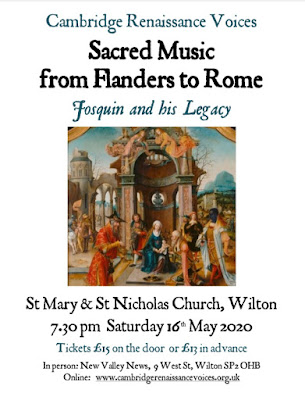 Tickets: £15 on the door, or £13 in advance from www.ticketsource.so.uk/mkctw

In music as in art, the Renaissance was in large part shaped by the currents of influence between the low countries – Flanders and the Burgundian Netherlands – and the courts of the Italian city states, from Milan and Ferrara down through Florence to Rome. This programme traces the musical diaspora that is epitomised by the career and legacy of Josquin des Prez, the master of Franco-Flemish polyphony, who worked variously for the Sforza dynasty, the Papal court including the Borgia Pope Alexander VI, and Duke Ercole of Ferrara. It includes movements from his great Pange Lingua mass, and music by his successors including Philippe De Monte, whose own move from Flanders to Italy led him eventually to the Habsburg courts and also to visit England where he formed a musical friendship with William Byrd.
Posted by Rupert P Bell at 08:17