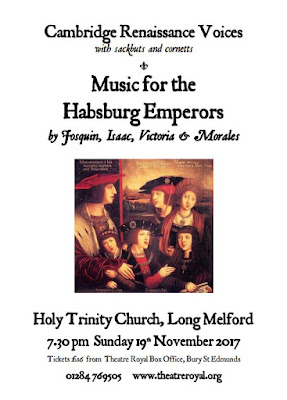 Five hundred years ago, in 1517 in Vienna, the court of the Holy Roman Emperor Maximilian I was in mourning at the death of the court composer, Heinrich Isaac. He had served the court of the most powerful family in Europe since 1503, after a distinguished career as singer and composer mainly in Innsbruck and Florence. Our modern day equivalent for Isaac would be a composer-laureate, commissioned to write for special occasions, and in this he excelled.

Virgo Prudentissima is an extraordinary work, which typifies Isaac’s ability to compose on demand. It was composed for the Reichstag meeting in 1507 which confirmed Maximilian’s role as Emperor. Set for six parts, it involves intricate solo passages interspersed with massive, resonant choruses.

Victoria’s Missa Laetatus Sum, which he published in 1600, is an impressive work for three choirs, inspired by the Italian style he encountered when living in Rome. It is based on his own setting of the psalm Laetatus sum, (I was glad when they said unto me, we will go into the house of the Lord). It’s very likely that a combination of voices and instruments would have been deployed for a piece of this scale.

Also composing for the Spanish court were Alonso Lobo and Francisco Guerrero. Lobo’s motet Versa est in luctum (My harp is turned to mourning) was written for the funeral of Philip II in 1598. Guerrero worked for a time for Maximillian II, and his motet Ave virgo, in which the two soprano lines follow eachother in canon throughout, became one of the most famous works of the succeeding century. 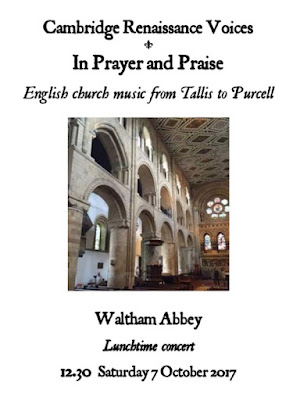 There's a chance to hear the choir sing a short lunchtime concert at Tallis's church, Waltham Abbey, on 7th October.

We'll be singing a selection of music by the foremost English composers of the Tudor era, Tallis's legacy, and finish off with some music from the Stuart age before and after the Commonwealth.

We are delighted to return to Long Melford in November, and will perform Victoria's Missa Laetatus Sum for three choirs, motets by Josquin and Morales, and the magnificent celebratory work by Heinrich Isaac, Virgo Prudentissima.

We will be joined by I Musici Della Contessa, a six-part renaissance instrumental ensemble, comprising two cornetts, three sackbuts and curtal. 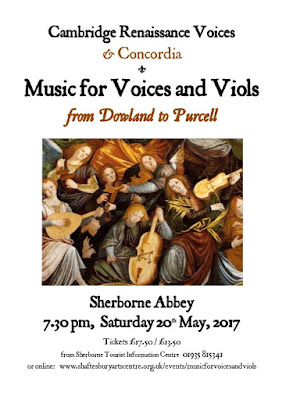 Cambridge Renaissance Voices join forces with the viol consort Concordia in the glorious setting of Sherborne Abbey, to explore a rich repertoire of English music from the 17th century.

This was the golden age of consort music, where voices and viols were used interchangeably or together. Viol consorts were central to domestic music-making, in part- songs or madrigals equally suited to string players or singers.

A parallel tradition developed in relation to church music; for over a hundred years, English composers explored the fascination of vocally inspired instrumental polyphony by writing ‘In nomines’ for viol consort, weaving elaborate instrumental lines around a musical theme taken from the Tudor composer John Taverner’s mass on the plainchant ‘Gloria Tibi Trinitas’.

Voices and viols came together in the verse anthem, whose greatest Jacobean exponents included Orlando Gibbons and Thomas Tomkins. The music of Henry Purcell represents in many ways the culmination of this rich tradition. While his anthems straddle the musical styles of the late Renaissance and a more dramatic idiom signalling the early Baroque, Purcell’s viol Fantasias look back to an earlier age, bringing to an old instrumental form a dazzling complexity and musical beauty.