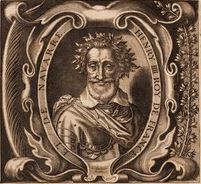 The choir repeats most of the "Requiem for a Renaissance King" programme in London on Saturday 14 November in the Belsize Festival.

Known subsequently as "Henri le Bon" and "le roi de la paix" because of his policy of religious toleration and his importance as the founder of the Bourbon dynasty, Henri IV was assassinated by an extremist on the streets of Paris in 1610. For him and all victims of violence, requiescant in pace.