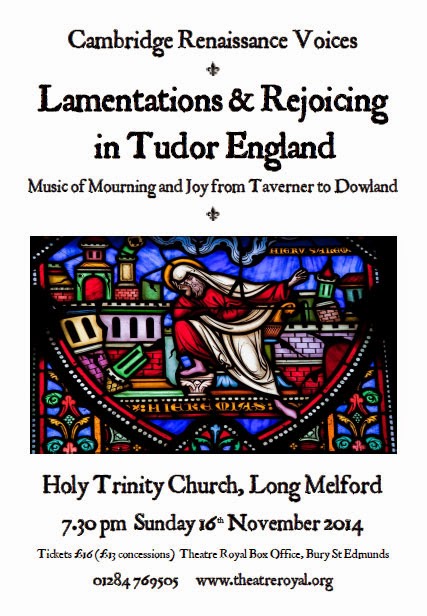 Following last year’s concert celebrating musical splendour and devotion, Cambridge Renaissance Voices return to Long Melford to continue their exploration of the Tudor sacred choral repertoire, with a programme contrasting extremes of moods, of mourning and joy.
As well as some of the most exuberant songs of praise in the repertoire, such as William Byrd's 'Sing Joyfully', and more contemplative motets for different seasons, the programme illustrates the intense beauty of music intended to inspire repentance or to serve as consolation.
The Lamentations of Jeremiah had a particular resonance for several Tudor composers, with the plight of Jerusalem offering a parallel with that of catholics in protestant England.  Robert White’s hauntingly beautiful setting will be juxtaposed in this programme with musical renditions of another great Biblical lamentation, that of David for his son Absolom, and some rarely performed funeral music by John Dowland, most famous among his contemporaries for spinning musical beauty out of grief.
Posted by Rupert P Bell at 09:33 No comments: