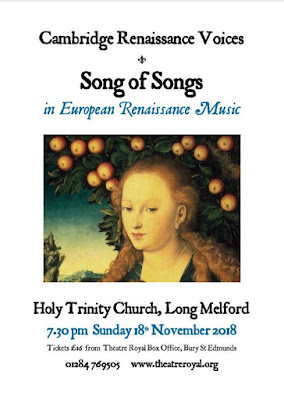 The Song of Solomon, otherwise known as the Song of Songs, features some of the most beautiful and sensuous poetic language in the Bible.

Cambridge Renaissance Voices explore this repertoire across Renaissance Europe, from Franco-Flemish composers such as Lassus and Clemens non Papa, through the music of Palestrina in Italy, to that of Tomas Luis da Victoria and Francisco Guerrero in Spain.

Flemish-born Orlando Lassus spent time in many different countries but settled in Munich in the service of the Duke of Bavaria. He was prolific and his music influential. He wrote about 60 settings of the mass, generally ‘parody’ masses based on borrowed tunes. In the case of the Osculetur Me mass, however, he used material from his own motet on the text. In the course of the mass, each of the motifs from the motet reappear in various different guises, rather like a theme and variations where the melody is first unvarnished (in the Kyrie) then progressively elaborated (especially in the Creed) before returning to a pure but transformed rendition to close (the Agnus Dei).

The programme also includes Victoria's incredible motet 'Vadam et circuibo'. The opening section of the text translates as follows: "I will rise, and will go about the city: in the streets and the broad ways I will seek him whom my soul loveth: I sought him, and I found him not. I adjure you, O daughters of Jerusalem, if you find my beloved, that you tell him that I languish with love." A piece of astonishing beauty and drama, this work surely derives its special quality from the composer's intensely emotional response to the text.
Posted by Rupert P Bell at 06:08